A Musical Moment: The Faction Vol 1 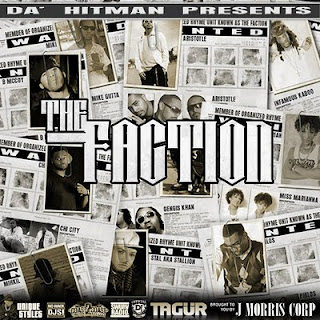 This Musical Moment is brought to you by a group of talented INDEPENDENT artists. All hailing from different parts of the nation, these artists came together on a compilation that showcases their differences while bonding them by their talents.

The Faction Vol 1, brings to you the many faces of hip hop. It takes artists from the East, West, Mid-West, and down South and colorfully blends their sounds. (With the help of Da' Hitman of Swurvradio) For any fan of hip hop, and I mean all hip hop; mainstream, conscious, club, & street, this will be a great listen.

Delivering such a wide range of approaches to hip hop expression, there is definitely something for everyone. Each artist shows their versatilty as they give different examples of their unique styles. With multiple tracks by each artist you will be hard pressed to narrow down a "favorite".

Not all the tracks are for the club or about love; Mike Gutta (Dirty South) laces a gritty track with some with tales of the street on "Prices On They Head" and spits just as real on "Mis-Mentioned" two tracks that will definetly have you nodding your head. Infamous Kaboo (West Coast) reps the BAY AREA and lyrically paints a picture of the life of a hustler on "Money & Chop" he stays in time and turns it up a notch on "Godzilla & King Kong".

Miss Marianna (West Coast) goes in on "Flippin & Foldin" showing that she can hold her own as the only female emcee on the project. Her verse on "We Rollin'" solidifies her ability to drop a hot 16. She passess the mic to B McCoy (Chitown) who delivers his intricate verse in flawless fashion. B McCoy also brought "Gone Now" & "Cold As Blue" to the table, and the track is closed out by Gengis Khan (West Coast) who does not disappoint. GK rips the track like a seasoned vet. He also dropped "Long Time" and one of the truest tracks "Lay Me Down". Young emcees, get your pad and pencils and take notes.

Philos (West Coast) brings his own flavor with "Check" & "YO" he continued to bring the heat with fellow Cali rapper Young L of The Pack, on "Outer Space". His unique delivery will have you wanting to hear more. Chi City (Chitown) brings Chi-Town swag on "Go Getta" and gives you something to bounce to on "What It Is".

Collectively this roster has worked with some of the industry's greatest including; Lil Jon, Lauryn Hill, Bobby Valentino, E-40, Travis Barker, Paul Wall, Yung LA, Lil B, Twista, Chaka Khan, Pitbull, David Banner, Donell Jones, Too Short, The-Dream and Eminem. To call them experienced would be an understatement, so don't be fooled by the INDEPENDENT label.

All in all this is a collection of diversity, showing how hip hop has evolved and is bigger than just one topic or sound. The Faction; is branching out from the typical one lane mixtape and is doing something different. You may or may not feel every track based on your preferences, but it it is well worth the listen.

This work is licensed under a Creative Commons Attribution-NonCommercial-NoDerivs 2.5 Generic License.