So why last night around 11:30pm as I pulled up to an intersection did I see this young lady maybe 18-20 yrs old, struggling to carry what seemed to be an awkwardly heavy wooden table? She was resting the weight on the front of her thighs and would then re-shift the weight and keep moving. Just as I thought about seeing if she needed help she called out to a young man about 20 yards behind her. He too was carrying wooden furniture. It was maybe half the length of an average door. Only he was on a bicycle! Yes he was using the bike like a wheel barrow and was carrying his load with minimal effort. All as he stood by and watched her struggle into the dark...and she was moving faster than he was!

Every part of me felt like gunning it as he crossed the front of my car. I watched her arms tremble as she white-knuckled that table, and he coasted down the hill with ease...Bitchassness.

I pulled into a 24hr drug store, in the space next to me was a woman barely able to stay awake behind the wheel. Her head was dipping as she looked like she was fighting back sleep. In the backseat, a young child struggling to keep his eyes open in the same fashion. He was in a car seat and looked to have bags under his eyes from exhaustion. Not knowing their story I felt a little bad for them in went into the store. While in line there was a man in front of me. He was buying alcohol & cigarettes. That was all. He purchased his things as did I and we both walked towards the door. He nodded to me and asked, “Having a good night?”

I simply replied, “Yes, and yourself?”

He said, “I’m alright I guess, and if not this will make it better.” As he lifted the jug of cheap liquor. I nodded and we both walked to our cars that were side by side. He opened the passenger side door of the car next to me. The woman looked at him as he got in.

She asked him, “Did you get the formula?”

We have got to get this under control. This plague is spreading throughout our schools, jobs, & communities. It is infecting our youth, and crippling our adults. We need to ban together and put an end to this epidemic. These stories may seem funny and entertaining, but it won’t be funny in 30 years when Bitchassness is running the country. Ladies get a hold of these young women and shake some sense into them! Make them aware that they are not to tolerate this nonsense! Men, we need to hook some of these little S.O.B’s by the throat, drill them in their chests and make them learn about true manhood and responsibility!

We must ban together. We must unite against this common enemy. We must put a stop…to Bitchassness. 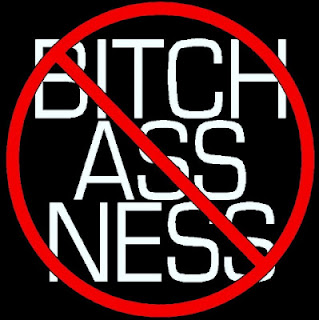 This work is licensed under a Creative Commons Attribution-NonCommercial-NoDerivs 2.5 Generic License.
at July 31, 2012