Are You Ready For Some Football?!? 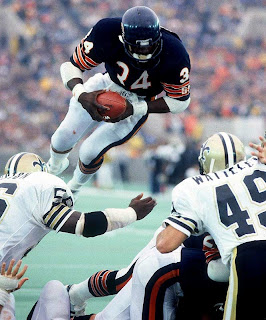 The kids are going back to school, the weather is cooling off & the stores are already breaking out the holiday merchandise…that’s right…it’s football season! The most wonderful time of the year…

The 5 months out of the year when there always seems to be a little extra parking space at church on Sunday. Millions of men will be glued to their seats in living rooms, stadiums, and sports bars everywhere as they run the emotional gambit watching their favorite teams do weekly battle. This is not to say that women aren’t fans as well, but they’re better at multi-tasking. It’s all tunnel vision for men.

The focus, the concentration, the research. Yes he can tell you every stat from where the quarterback went to high school to how many jumping jacks the kicker does on cold mornings. Men become FBI Agents when it comes to background checks and fact finding on his team…yet he struggles with anniversaries.

Football season is also the resentment season for a lot of women. They stand by and watch their seemingly unemotional man show such deep levels of concern, attention and passion for something other than them. Household duties and issues take a backseat while the game is on. Lassie can be tugging at his pant leg, but little Timmy may just have to stay in the well until halftime. Even sex can be trumped by Monday Night Football, and don’t let his team lose…she might as well just go to bed early.

Ladies, this isn’t to say that he doesn’t love you. This is one of those few things like his car or even his hair that he aligns with manhood. This is one of the few activities that a man is free and accepted to be emotional about. Where he can show off his football knowledge, brag about his team’s accomplishments, and bond with other men through sh*t talking. Don’t try to understand it, just accept it. Much like we do with your shopping, shoes, make up, tv shows, books, movies & pretty much everything else you’re in to.

This is one of those times that women need to learn how to “take the L”. Game time is not when we want to have a discussion about our relationship, job, family, vacations, or you. Yes we appreciate that you want to learn about the game, but kickoff is not when we want to field your questions or teach you. It’s not cute to hear you debate football knowledge with men, right or wrong. Football is a high testosterone zone, so yes we’re staring at the cheerleaders, the waitress, the girl in the jersey, the chick on the sideline, etc. Just let us eat, drink, watch, & be merry.

Some women love football because it gives them time to do what they want. They just leave beer and a trough of food and walk out the door. This is good too.

We know you’re there and appreciate when you allow us to enjoy what we like uninterrupted. A woman that knows how to manage the clock and successfully maneuver around her man on game days is more valuable than Drew Brees on a Fantasy Football team. You will get all the attention you need, and maybe a little more (depending on who wins) so sit tight.

This moment is for all the ladies that don’t know how to play their position during the football season. Trying to take that from him rivals his manhood and attacks his ego, women have been benched for less.

Make it a difficult or uncomfortable experience for him to watch the game at home and he…could…go…all…the…way…out the door!

This work is licensed under a Creative Commons Attribution-NonCommercial-NoDerivs 2.5 Generic License.
at September 06, 2012