Give me 10: 10 reasons, examples or indicators of a certain behavior. Take the time to use the checklist…you may need to check yourself. Today‘s list:The Top 10 Scariest Things You Can Say To A Man.

…and the #1 Scariest Thing You Can Say To A Man…

Sweep The Leg...For The Glory Of Love 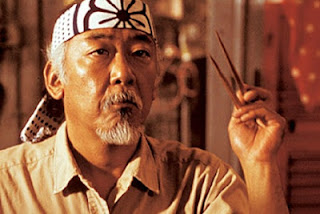 “Wax on, wax off”, “paint the fence”, even “man who catch fly with chopstick accomplish anything” are all classic quotes from the great 80’s hit movie ‘The Karate Kid”. A tale of a young boy who moves to a new town and school and is bullied by some of the local boys. To make it worse all of the bullies take karate. After a few beat downs the star “Daniel” stands up for himself, just to again get 2-pieced until he is saved by the mysterious Mr. Miyagi. Now we’re all familiar with the story all the way down to the triumphant “crane kick”, how Daniel learned karate, beat the bullies in their own karate tournament, & got the girl. This film was the jump-off to only one good sequel “The Karate Kid II” and several others including a remake that could have just as easily never happened. In the first sequel it was a repeat only instead of Los Angeles Daniel & Mr. Miyagi were in Japan. Once again he was called upon to fight only this time it was for a woman and his life…not a trophy.

Why are we talking about these movies? Is it about overcoming adversity? No. Is it about realizing and tapping into ones true strength? Nope. How about never backing down and standing up for yourself? Uh-uh. Maybe recognizing that a middle-aged man & an awkward teenage boy CAN have a positive, harmless, & appropriate relationship? Wrong again. Why bring these movies up…? The soundtrack! Didn’t see that one coming did you?

Specifically the second film and pretty much one song that crystallized the intent, purpose & passion of the first two films…”The Glory Of Love.”

Stay with me here:

“Sometimes I just forget, say things I might regret,
it breaks my heart to see you crying.
I don't want to lose you,
I could never make it alone.”

Now these lyrics can be found in any sappy love song from R. Kelly to Trey to even Justin. Men crying over a woman is nothing new. In fact it has become so prevalent that it holds little to no value anymore. Women aren’t touched, they see the Bitchassness and realize they truly have the upper hand. It only fuels the “I don’t need a man” fire.

“You keep me standing tall, you help me through it all,
I'm always strong when you're beside me.
I have always needed you,
I could never make it alone.”

Now this part gets a little deeper, acknowledging a woman’s help in getting us through or to where we need to be isn’t as common. Often we walk away from the one that was with us through the rain & the pain to settle down with the one that came with the better situation. Oh yes a tiny waist, double D’s, and weave for days comes standard with the good life, much like leather seats in a Porsche, but like the Porsche that woman is usually not how we arrived there.

Great verses, however this song sticks out to me so much because of the chorus;

“I am a man who would fight for your honor,
I'll be the hero you're dreaming of.
We'll live forever, knowing together
that we did it all for the glory of love.”

…and there’s the kicker! In this era of faux bravado & I hate to use the word, “swag”, this is what’s missing. What happened? What happened to the time when there was zero tolerance for our woman being disrespected, including by us? What happened to defending a woman’s honor, not just by fighting in the streets or club, but simply by not defiling her name with tales of our own exploits? What happened to taking on the monumental task of “whatever it takes” as what we’re willing to do to keep us together? What happened ladies…?

You did! This isn’t “A Cold Cup Of Coffee” edition but we’re getting real ‘round here!

Ladies it was you! You decided that you don’t need us. That you can do anything & everything on your own. You decided that a man is nothing more than an accessory like your purse or earrings. Ladies you decided to wear the pants and the apron too. By taking away these responsibilities from men, you single-gender-handedly put out a hit on chivalry! Is chivalry dead? No, but it is on life support barely clinging on due to the bullet you ladies put in it executioner style.

Look I’m not telling you to not be strong or to bow down, a woman is the definition of strength. I’m saying that men rise to the level of what’s necessary, by taking away those roles you took away our task and purpose. Think of a Queen Bee, how does it serve her or the collective to have a colony of drones with nothing to do? Drones just buzzing around from flower to flower looking to put their stingers anywhere. Even if you don't want a man do it for your fellow woman, your friends, your sisters. Men stopped trying because we no longer had to. Once you women decided to make the money, have the kids, and still give us sex...we clocked out. I know it was our decision to not try harder, that's why we need you...to sometimes save us from ourselves!

Women of the world; we men will fight, protect, provide, live & die for you. We will be what you need us to be. We’ve proven that since the beginning. We just need those requirements, opportunities, & that understanding. Regardless if you feel like “you need a man” or not, men need that purpose. I'm not saying to quit your job, i'm saying let the man know he has a value & it's his responsibility to maintain it. What may seem like a step back is actually a leap forward. We need to reimplement the need and importance of both men and women for more things than sex or money. I know it’s going to take a little while to get it back, Rome wasn’t built in a day, even though it feels like Bitchassness crept in overnight. We need you to get that just as we don’t always see our expression of love for you as being about us, you need to accept that we really only value what we work for and not make our need to have a purpose all about you.

It has been proven repeatedly over time that men are at our best when we are driven by something we view as greater than ourselves. Ladies with a little downsizing to the Ratchet Regime and a little more standards on how you behave & what you’ll tolerate this can be shifted back to you. Is it “fair” putting the responsibility on you? Maybe not, but let’s see if you still care after you’re dealing with Bitchassness free men again.

We’re here to take out Bitchassness at all costs…and we're not afraid to...

This work is licensed under a Creative Commons Attribution-NonCommercial-NoDerivs 2.5 Generic License.
at October 10, 2012 2 comments: