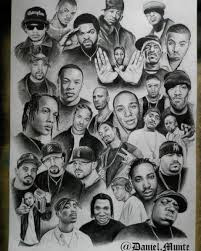 I was born in the winter of 1977, so my base of music is really in the 80’s and 90’s. I grew up in a family of singers and musicians, people who had an appreciation for “real music”. Real instruments not synthesized, live singing no lip synching and don’t get them started on auto-tune. As much as I’ll always love The Time, Kool & The Gang, James Brown and Stevie Wonder it was hip hop that spoke directly to me.

Though I came up in the Run DMC, LL Cool J, Eric B & Rakim era, I liked Kwame, Kid N Play, DJ Jazzy Jeff & The Fresh Prince (Not the hardest emcees in the game I know) I listened to be entertained not educated.

It wasn’t until my high school years that I really started “listening” to lyrics. Ice Cube was and still is my favorite rapper. From NWA’s “Straight Outta Compton” to “Amerikkas Most Wanted“, “Death Certificate“, “Predator” etc his lyrics spoke to more of what I was thinking and feeling. So what happened? How did “Parents Just Don’t Understand” get replaced by “Once Upon A Time In The Projects”? The answer…life.

As a kid I was made aware of the struggles I would face for no other reason than the color of my skin. My parents instilled in me that by being “Black” I had to try twice as hard and do twice as well as my “White” counterparts to make it in this country. A lesson I thank them for. I did well in school and was generally well liked. It was right around 6th grade when things for me changed. For people of color in America we’ve all had this “allow me to reintroduce myself” moment in this country.

I got into an argument with a fellow student who happened to be “white“, over nothing of real consequence and got hit with the “go back to Africa” line. (Could have been worse I know) This would become the benchmark moment in which race relations would forever be changed in my mind. Up until then I was liked or disliked (well at least to my face) for “who” I was, not “what” I was. As the years would go by more and more “incidents” would occur. Going to predominately “white” schools from the 8th grade on they would become drastically more frequent.

By high school 2Pac’s “Strictly For My…” stayed on repeat, coupled with Dr. Dre’s “The Chronic” my perception of the world had shifted. I was light weight looking for the racism in everything. I had Ice Cube telling me “My Skin Is My Sin”, Arrested Development talking about “Tennessee” all while Public Enemy was letting me know, “Can’t Truss It”. Different voices making me aware of the world in which I lived.

If it’s true that he who seeks shall find, I found every injustice I was and wasn’t looking for. From hidden back handed comments to full frontal discrimination it was there…and it’s still there. Remember this time of my life was coming off of the Rodney King beatings to the OJ trial. I’m nearly 40 now and the same things that were being spoke about in my youth are still playing themselves out on the news every night today. Drugs, crime, propagated narratives, police brutality and civil unrest has my 2016 looking like Watts in ‘92 or Miami in ‘80, Washington D.C. in ‘68 or Philadelphia in ‘64...

The difference? The music of that age spoke in a language that was informative, educational as well as entertaining. I wasn’t being told to go out and break laws and be violent just as I wasn’t being told to just get high and be oblivious. Being made aware of the things that were going on around me made me think. To challenge what I saw as well as what I heard and I fear that the youth of this era are being cheated of that. For every Kendrick or J Cole there are a million “insert rapper here”, talking about nothing and keeping our young people asleep. Being prompted through their music to exercise critical thinking helped me to mature and make better choices.

The fires that 2Pac stoked made me want to learn more and do better. KRS- 1 had me fact checking, as Queen Latifah pushed U.N.I.T.Y while X-Clan kept me in check from being a “sissssssssy”. They were the village that I needed.

This moment is dedicated to O’Shea Jackson, Brad Jordan, Tupac Shakur, Nasir Jones and all of the other men and women that used their voices to help me find my own.

And even though you may hear me rolling around bumping “It Was A Good Day” I still turn it up for “Summertime”.